Greetings from Lucerne, Switzerland! It has been an incredibly busy week of exploring and music making, and it feels like I've had a month's worth of experiences in the short time that I've been here. I arrived in Lucerne, about an hour south of Zurich, on Saturday, Aug 13, to beautiful weather, a sparkling blue lake, stunning mountains, and LOTS of tourists. In the main train station I heard far more English, French, Italian, Korean, Russian, etc., than Swiss-German, as it's a very popular destination for tourists of all sorts. I could go on at length about this beautiful town and the unreal scenery surrounding it, but I'll leave the story telling to the pictures and go on to the music...

The Lucerne Festival Academy Orchestra is comprised of about 100 young musicians from around the world, who are particularly interested in contemporary music. And when I say contemporary I don't mean Stravinsky, Bartok, or Ligeti - who of course are all geniuses in their own rights. The orchestra is in fact performing works by all three of these 20th century giants, BUT the meat and potatoes of this festival lies with the true "contemporary" composers. We're talking Mark Andre, Iannis Xenakis, Helmut Lachenmann, Konstantia Gourzi (who is in Lucerne conducting her own works), Olga Neuwirth (the 2016 composer in residence, also in town during the festival), and others! Look up these men and women, they are doing incredible and groundbreaking things.

Our concert at the end of the week, after a mere 6 days of rehearsing and practicing, consisted of György Ligeti's San Francisco Polyphony, Mark Andre's ...hij 1..., and Igor Stravinsky's The Firebird (the full ballet, not the concert suite, for any music trivia lovers out there). Obviously the second half of the concert with The Firebird was the "standard repertoire" of the evening. The first half proved to be challenging for both performers and audience, but was a committed and successful performance. I find that often with contemporary music commitment is half the battle, playing these strange techniques and technical passages verging on the impossible with vigor and gusto, and I hope it's not blasphemous to say so!

The Ligeti piece was a work of soundscapes and huge orchestral textures. At some moments all the members of the orchestra were playing but almost everyone had a unique part, so that nothing seemed to line up with anything else. During these spots I had to watch the conductor very closely and hope to hear a snippet of someone else's part that would tell me where in the measure we were. All of that said, somewhere in the middle of the week the "group think" started happening and it seemed like each member settled into their part, and their place in the orchestra. The piece started coming to life and I could hear melodies here and there, an expected harmony shift, and ultimately an arcing shape to the piece.

The other piece on the first half, Mark Andre's ...hij 1... was even more of a technical stretch than Ligeti. It involved slapping mouthpieces, buzzing into the end of a bassoon bocal, rustling tinfoil, bowing the wood part of a violin, and tongue slapping, to name just a few extended techniques. It takes an extraordinary mind to not only come up with these techniques but organize them in a way that creates a mysterious and intriguing world for 20 minutes. Fortunately for us this mind was present at the festival to guide and encourage us as we figured out how to perform this recent work from 2010. Overall it was quiet. It whispered and shooshed, an understated and hushed insistence, with the occasional interruption of brass hits or loud string tremolos. The opening few minutes contains only strings bowing on the wood part of their instrument, and begs the audience to strain themselves to hear it. In fact it begs that of the rest of the orchestra too, which I think draws everyone into the same aural and psychological space. We're all in it together until the piece is over.

After discovering these works over the course of a week it's hard to put them aside and begin a whole new set of contemporary pieces. I feel like I've dipped my toes in and already have to leave for another adventure. This week we will be playing Arnold Schönberg's Accompaniment to a Cinematographic Scene, Olga Neuwirths' Trurliade-Zone Zero, Anton Webern's 6 pieces, and Helmut Lachenmann's Schreiben. It should again prove to be challenging and rewarding, and I'm sure it will zip by.

Rain storms roll through all the time without much warning, thanks to the weather patterns caused by the Alps and the lakes nearby. This one made for a dramatic cloud formation!

Hilltop inn and restaurant that I walked to and had a beer before heading back down. This seems to be a thing here - mid hike refreshments. I'm not complaining.

View of Lucerne from Hotel Gütsch up on the hill.

Join us for The Buzz! 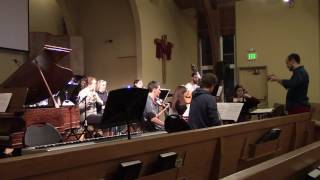 Preview for In Nature's Realm

The Buzz with The Sound Ensemble